It’s been a long week of hospital visits. things are getting better. Hold tight, we’re nearly through this year.

Here’s what I have watched this past week and a bit.

451 12/29 Dario Argento’s World Of Horror (1985) 2.5/5   Documentary on Argento that features some great behind the scenes footage, primarily from Phenomena, but takes itself so seriously as a “horror” type film with clips that it’s more ridiculous than interesting and feels like a missed opportunity.

452 12/01 Mulberry St. (2010) 3/5   Abel Ferrara’s documentary on the street he was from in New York, and where many of his films took place. Focusing mostly on the feast of San Gennaro, it’s a rambling film of neighbourhood stories that is far more watchable than it should be. 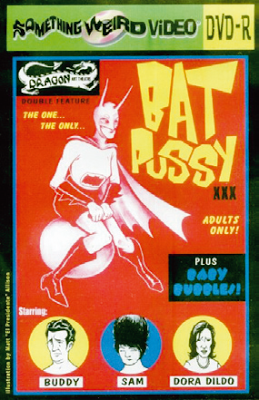 453 12/04 Bat Pussy (1973) 1.5/5   Possibly the first superhero porn parody, this one is so inept in every way that it’s a chore to watch at 50 minutes. Majority of the film is take after endless take from the same camera set-up of a couple improving lines on a bed and engaging in action. A few bits are Bat Pussy out to save the city from them? Only fun to be had is watching Bat Pussy bouncing around on a Hop-It. Everything else is bad bad, not fun bad in any real way. It could have been a lot of fun, but it ultimately fails.

Next are a couple of shorts found on the Bat Pussy blu-ray.

455 12/05 The Shoplifter (1964) 3/5   Instructional short showing retail business how to spot and prevent shoplifting. It’s actually pretty interesting to see all the tricks of the trade. I’m pretty sure I can get away with some five-finger discounts now.

This next one is a bonus film found on the Bat Pussy blu-ray and manages to be even worse.

456 12/06 Robot Love Slaves (1971) 1.5/5   A dire softcore cheapy about a scientist reanimating dead girls into love slaves. Only notable for some cult adult stars like Sandy Dempsey. Not worth seeking out.

457 12/07 Love Camp 7 (1969) 3.5/5   I can’t believe I’m rating this one this high. A nasty exploitation in every way about a couple of women agents infiltrating a Nazi sex camp to smuggle out a rocket engineer. It’s all high concept for the most base sexploitation, and is pretty much irredeemable morally. But for what it is, it’s not bad? This is my second viewing and it holds up despite being reprehensible.

458 12/08 Nazithon: Decadence and Destruction (2013) 1.5/5   Trailer compilation of naziploitation that is low quality in every way despite showing the “good” bits.

459 12/09 Abar: The First Black Superman (1977) 2/5   Abar is fighting the man, especially after the white folk go bonkers when a black doctor moves into their neighbourhood. Problem with this one is it takes almost the entire running time to get going. Once it does, it’s not really worth it.

460 12/09 Doc Savage: The Man of Bronze (1975) 3/5   Finally got around to this one and frankly it left me a little conflicted. It’s goofy, played too kiddy and light in tone and more than ridiculous. It’s also fairly accurate to the book. Give this a more serious tone and it would have been a classic. As it is, it’s more a curio.

461 12/10 Tarzan The Ape Man (1981) 2.5/5   John Derek has to film his wife Bo nude again, so this time it’s the Tarzan story that gets the excuse. I vaguely recall seeing this one back in the 80’s and revisiting it, it’s not good. It’s goofy and frankly not filmed very well with lots of dodgy slow motion. It also features Richard Harris being maximum Richard Harris which I find kind of fun but it wears a little thin.