Another tough week of struggle out here in the west. Weather seems to be torturing us into death by being both too cold and then warm in the same day. I’ve felt like I’ve been coming down with a cold for the past two weeks. I think it’s the barometric pressure kicking my head in. I’m ready for winter to end.

056 02/26 The Extra Girl (1923) 2.5/5   Mabel Normand stars in this Mack Sennett comedy about a young woman who wins a contest to go to Hollywood for a chance to be a star after her rural parents refuse to allow her to marry her mechanic boyfriend. Lots of intrigue, not many laughs in this silent feature. Mabel was an incredible talent but this one doesn’t give her too much to do despite a plot that goes all over the place and allows her to do a bunch of stuff. It just never really works out aside for the chase sequence with the loose lion.

057 02-26 89th Academy Awards (2017) 3.5/5   The night we have all been waiting for! The one where the starving artists we enjoy on the big screen are finally fed via airdrops of food! It really is a beautiful sight, millionaires enjoying Jr. Mints. they really are just like us!. This one ended up being pretty good. Show moved about as quick as these things can, only one of the bits (tour bus) went on too long and there was an epic fuck up with the best picture award going to La La Land instead of Moonlight, so that was fun. I had no horse in the race so nothing stuck in my craw or had me orgasmic in delight. It was just a mostly nice show and Jimmy Kimmel did a good enough job as the host that I wouldn’t mind seeing him do it again.

058 02/28 Gilmore Girls Season 5 (2005) 3/5  I’ve reached the part in the series where old is new and I’m hitting the episodes I missed the first go round. This season was a let down from previous ones. Lorelai finally gets with Luke, and the writers do a thing where they turn Luke from the greatest guy/only decent guy on the show to a rage-aholic asshole. Rory is still in college and is now interested in Logan, a rich kid prick and it all makes the season a bit insufferable compared to the heady joys of season 3. It’s still good though since the performances and writing continues to stay true to the characters (aside from Luke), and while the Gilmores are floundering it gives space for Kirk and Lane to steal the show.

059 03/01 Color Me Blood Red (1965) 3/5   Herschell Gordon Lewis wraps up the “Blood Trilogy” with this one, a comedy about a bonkers painter who discovers that blood is the perfect colour of red and gets inspired. It’s basically a rip-off of the superior in every way Roger Corman film Bucket Of Blood (which is probably more famous for being the one that wrapped production in time for Corman to crank out the cult classic Little Shop Of Horrors over the 2 day weekend before he had to return the rental equipment), only on the cheap and with more gore effects. This one suffers from the typical Lewis corner cutting. Rather than stop the camera and doing a second set-up, he’ll do things like let it run while a second actor gets ready and then pan and focus to shoot them and it just slows the film down to a crawl. Which is saying something when the film is about 70 minutes long. There’s a reason why he’s considered a hack, and it already starts to show in this one. That said, it’s still fun, and I always watch it since it’s billed as the third film in the trilogy so my mental illness dictates that I have to watch it after Two Thousand Maniacs.

The weird thing watching the Blood Trilogy in this day and age is how chaste they are. I don’t think a single swear is uttered and despite Lewis and Friedman coming from the Nudie Cutie circuit there is no explicit nudity. There’s just buckets of gore all over the place. It’s probably what saved them from the censor to some degree. Still a fun watch even if they are dated, and Two Thousand Maniacs really is a classic. After Color Me Blood Red Lewis and Friedman will split up, but both will keep on making films on their own. 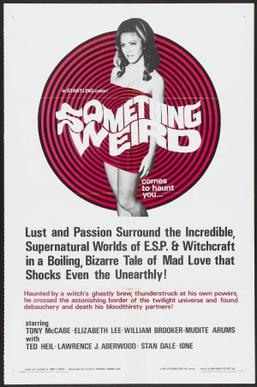 061 03/04 Something Weird (1967) 3/5
062 03/04 A Hot Night at the Go Go Lounge! (1966)2/5
An odd pair of Herschell Gordon Lewis cheapies. Something Weird is exactly as titled. A guy is electrocuted and ends up with psychic powers, joins a witch that tricks him… there’s murders as well… a guy gets attacked by his bed sheet… and I’m out. You can’t describe it. It’s a comedy, it’s a murder story, it’s psychic flim flam and an LSD scare film all at once. You have to see it to believe it. The craziest thing is it’s actually pretty accomplished in form compared to most of Lewis’s films.

A Hot Night at the Go Go Lounge! is a nudie short in which the first half seems to be footage from other films and the last half featuring surprisingly plain topless dancers. More of a curio as opposed to something worth seeking out.

I try to mix up what I watch, to find a balance, but I’m finding that the weeks are getting away from me so I end up not getting anything in other than genre films. I might have to take a time out to feed my brain.