We managed to not get ourselves into a nuclear war, so I guess it’s movie time.

A real mixed bag with this one. I’ve jumped back into the Herschell Gordon Lewis Shock & Gore set, continue with the Forbidden Hollywood Volume 9 set from Warner’s of Pre-code films, got in a never ending wrestling event and went Hollywood over the weekend with a side of Vinegar Syndrome’s PeekARama series. Something for everyone? Probably not.

084 04/03 Hell’s Highway (1932) 3.5/5   Pre-Code gem starring tough guy Richard Dix as a con on a chain gang. Made to show the brutal treatment of prisoners, chain gangs were still a thing in 1932, it’s hard to watch now and not think of the private prisons still using prisoners as slave labour. I’m a sucker for prison pictures and this one was a pretty good one.

085 04/03 She-Devils on Wheels (1968) 2.5/5   Herschell Gordon Lewis does his take on a biker gang picture with this one about an all girl biker gang that’s running wild. It’s a great premise but Lewis fails to pull it off. It’s too chaste when it should be wild and sleazy, and Lewis is too incompetent to film a biker picture since you can barely hear any dialogue when the bikes are running. More of a curio than a good picture in his catalogue.

086 04/04 The Cabin in the Cotton (1932) 3/5   A not bad pre-code film starring the completely forgotten Richard Barthelmess as a worker growing up on a cotton farm (post-slavery) and torn between loyalties with the “Planters” who own the land and the “Peckerwoods” who work it. Obviously I couldn’t help snickering every time someone was referred to as a “Peckerwood”, but aside from that the only real draw in this one is it’s an early Bette Davis picture. Bette steals every scene she’s in as the owners hot to trot, privileged daughter, because of course she does. Otherwise there’s not much to note. Director Michael Curtiz (Casablanca, to name drop just one absolute classic from his filmography) does a decent job, African Americans are shockingly shown as sympathetic and not too stereotyped for the time, and lead Barthelmess has one dumb expression on his face the whole time and fails to rise to lead the picture, or stand a chance against Queen Bette. Interesting only for Bette, and seeing her take complete control over the picture. 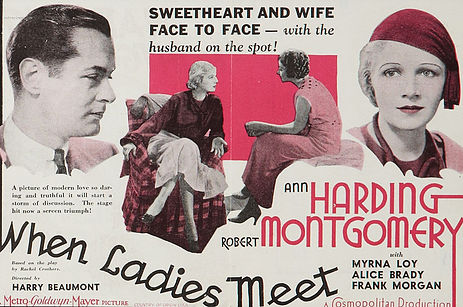 087 04/05 When Ladies Meet (1933) 2.5/5   An overly talky play adaptation about a woman author who has fallen for her married publisher in a very modern way. Not much else happens. Second billed Robert Montgomery and third billed Myrna Loy steal the show as the author and the boy she’s refusing for the publisher. For what it’s worth, with the main problem being Alice Brady as Myrna’s best friend in the comedic role who is the kind of annoying, privileged eccentric you want to strangle. Another case of people being in better things, watch Loy in The Thin Man, and check out Montgomery’s progressive noirs Lady in the Lake (filmed in first person POV!) and Ride The Pink Horse, which he also directed.

088 04/06 Just For The Hell Of It (1968) 2/5   HGL really starts scraping the barrel with this one. Some youth gang is wandering around breaking stuff and basically just being a bunch of assholes for no reason. It’s an attempt at creating a new genre (so claims HGL), but is so completely pointless and inept that it does not work at all. Only good thing was the theme song (written by Lewis) and an extended band performance near the front that is pure filler, but pretty good filler. 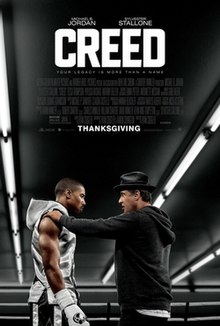 089 04/07 Creed (2015) 4/5   I think the last thing any Rocky fan thought they’d see is another Rocky movie. Switching things up and focusing on Apollo Creed’s son is a stroke of genius, and the film really works well as both a character study and a boxing picture. There’s not much to say, it hit’s all the standard plot points of a Rocky picture, it’s just done really well with a touch of class. The boxing scenes are exceptional and allowed to stretch with more artistic touches that works surprisingly well considering how gritty and realistic the rest of the picture is. Worth checking out, especially if you’re a Rocky fan.

090 04/07 Sherlick Holmes (1975) 2/5   Harry Reems stars as the title character who creates a time machine that transports Watson and himself to 1970s Times Square where they have to fuck their way back to Victorian England. Nothing too redeeming about this one which is most likely a weekend wonder with the highlights being how poorly made it is. There’s something charming about releasing a film where you can hear the producers feeding the actors lines, but that charm only goes so far. It’s more interesting than good.

091 04/08 Wrestlemania 33 (2017) 2.5/5   I stopped watching WWE last year when it became apparent that Vince McMahon was going to buy his wife a position in the Trump administration. That and the product is so bloated that the amazing performers are largely wasted. This Wrestlemania confirmed my decision. I found pretty near the whole thing dull as dishwater (so dull I nearly forgot to include it on this list). The highlight was the return of the Hardys and the only reason I watched it was to see Undertaker in what may be his last match. I would’ve preferred a better opponent than Roman Reigns, but it was a serviceable last match. I won’t be following it after this. Lucha Underground is a ton more fun without the 7 hour a week time commitment.

092 04/08 The Hunger Games: Mocking Jay Part 2 (2015) 3/5   I found this one to be the weakest of them all. Main problem is it felt padded to hit a two hour running time. There’s nothing wrong with it, it just plods along which weakens the later moments that are supposed to hit harder. On a whole, I’d give the series a 4 out of 5.

It feels like I’m never going to finish that Shock & Gore set. I’m averaging a disc a week. they’re so packed with special features, and I watch them late at night before bed, I’m going to be glad to finish it and move onto other things. Don’t get me wrong, they’re fun as hell even if they aren’t very good. It might be too much of a good thing. Aside from that, a pretty big week! It’s been awhile since I’ve gotten in 10 films in one week.