More movies! Past week was an absolute bitch at work with our customer base being even more clueless and challenging than normal. When you have conversations explaining to people that the “Forrest Green” they say they purchased last month was actually called “Meadow Green” and that is why I was quoting them the wrong product, it does your fucking brain in.

So no fake deep thoughts to intro this one. Here’s the shitty movies I watched last week. 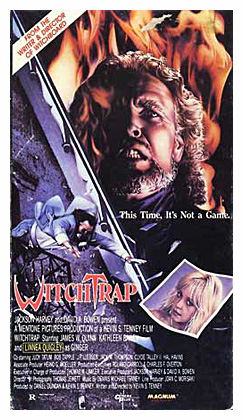 077 03/26 Witchtrap (1989) 3/5   At first glance all this film seems to have going for it scream queen supreme Linnea Quigley, as depicted on the poster. It’s actually a not bad haunted house type deal about a group of investigators trying to ghost-bust a house so it can become a bed and breakfast. Quigley has a minor role as a para-investigator that looks after all the tech, which has to be one of the only “smart” roles in her career. She still has to show her tits in a shower scene though, such is the life of a scream queen. Anyway, it’s pretty good but has a major problem. They mucked up the sound when filming so all the dialogue and sound effects are looped in post, and not very well. I’ve seen Italian dubbed films with tighter synch than this, and it makes for distracted viewing since everything sounds separate from the action. Which is a shame since aside from that it’s quite accomplished.

078 03/28 The Book of Joe (1984) 3/5  Student short film by the director of Witchtrap, Kevin Tenney is a little gem of a film about a defence lawyer who has to represent a man claiming to be the returning Jesus Christ. It manages to not be corny or preachy despite having a pro-faith lean. Included on the Blu-ray due to having many of the same actors as Witchtrap, it’s a neat addition.

079 03/30 Big City Blues (1932) 2.5/5   Pre-Code film from Warners finds a hick arriving in New York to set the town on fire and ends up getting burned. Probably most notable today for Humphrey Bogart having a small unbilled part. That’s kind of the problem with this one, lead Eric Linden as the hick is so completely overshadowed by co-star Joan Blondell (who gets top billing, just look at the poster) and everyone else that it’s hard to root for him since he’s such a unlikable, naive milksop. It ends up being serviceable at best.

080 03/31 Black Mass (2015) 2.5/5   Johnny Depp stars in the true story of Whitey Bulger, psychopath crime boss of South Boston. Depp does a pretty good job in this one, compared to the cartoon-like roles he’s been playing recently. That said, it’s not a very good movie in that despite being a true story it hits all the crime beats these pictures usually do without offering anything new and holy shit do actors love to mangle those Boston accents. I left this one thinking a documentary would have been better. 082 04/01 The Hunger Games: Mocking Jay Part 1 (2014) 3.5/5   Finally getting around to these. Problem I had is I barely remember the first two films, so most of this one was me going “Oh, right!” as plots came forward in my hazy brain. This one mostly revolves around Katniss mooning about for Pita while becoming a reluctant leader of the revolution. It’s good, though kind of sad since I think this is the last film Philip Seymour Hoffman did before passing he’s just so goddamned good. I think that’s why these pictures work. The love triangle stuff is lost on me since I find both the guys (Pita and whoever the other one is, so forgettable I can’t recall his name) so useless, the rest of the cast is so strong that it allows you to kind of forget about it and makes the rest of the film work.

And with that, I will leave you for another week.

The weather seems to be changing. The grim, grey of winter is turning blue, clear and warm with spring. Plus temperatures in March. It’s weird, global warming you can feel. It makes me wary. It’s too early for it to be nice, I’m waiting for the blast of arctic air to prove it is a trick. This part of the world likes to punish you when you grow complacent. Nice spring days, I’ll stay in. You’re not going to get me. 081 03-04 Blonde Crazy (1931) 4/5
James Cagney stars in this pre-code film about a bellhop who falls for a blonde maid at the hotel he works at, and gets her to join him out on the road, conning folks out of their money. Joan Blondell is the blonde, and as per usual, she takes zero shit from anyone in a great part. Cagney was on the cusp of super-stardom when he shot this one, THE PUBLIC ENEMY would of came out earlier in 1931, so it’s neat seeing him play a bit of a wanna-be tough guy who’s only successful because Blondell is there to straighten him out. Being pre-code, Blondell gets a chance to really shine as a superior, the women are always calling the shots in these films. That’s the toughest thing about watching pre-code films now, you really see how garbage many women’s roles became after the code went into effect. They go from hunters to victims. Anyway, this one was a good one, and worth a watch if it pops up. 082 03-06 Watership Down (1978) 4/5
It’s been ages since I had last seen this, back in the VHS days. Remember those, VHS tapes? You had to rewind them? Please say yes. Anyway, this one is a cartoon about a warren of rabbits forced to look for a new home. It’s brilliant in every way, with perfect animation, voice work, and it plays it straight. It’s not for super young kids, but it they’re getting restless with Disney, throw this one on and straighten them out on the ways of the world. I want a warren on a hill. The Criterion Blu-ray is as per usual pretty great, with some really nice special features. 083 03-06 Tasty (1985) 2/5
This is the bonus film on that RIBALD TALES OF CANTERBURY disc from Vinegar Syndrome I reviewed last time. Also starring Hyapatia Lee, and directed by then husband Bud Lee, this one too was shot on 35mm, and that’s about the best that can be said of this one. Hyapatia plays a DJ at a failing radio station, so she decides to sex up the airwaves to get better ratings. It want’s to be a cheeky version of WKRP IN CINCINNATI, but it just never works with too many dumb sex scenes and not enough story to carry it. That said, the music video spoof in this is about as good as you can get for the era. As far as discs go, the quality and presentation is up to Vinegar Syndrome’s standards, I just wish the actual films were better. The commentary track on RIBALD is more interesting than the two movies.

084 03-07 20,000 Days on Earth (2014) 3.5/5
Not quite a documentary, and not really a fictional film, this features Nick Cave mostly musing about the creative process. The presentation is a bit pretentious, because this kind of thing can’t help but be pretentious, but it really delves into the process of creating unlike anything else I’ve seen. Really deep. Which is good. Unless that’s part of the fictitious presentation. I would of preferred more performance footage from through the years, but that’s not the point of this one, this is Nick Cave, 20,000 days on earth. The performances we get are gold. I think this one would be good even for non-fans, if you’re curious about Nick Cave, or if you’re into songwriting/creating music/writing, that sort of thing.

085 03-07 Lust At First Bite (1978) 2/5
This is the sex heavy, alternate cut of DRACULA SUCKS (which I reviewed last October) and boy is it a doozy. The cut of DS that Vinegar Syndrome released wasn’t perfect, but it mostly made sense and worked really well as a Dracula adaptation. This version is cut to hell, makes no narrative sense, and has a bunch of over-dubbed joke lines and what not on the soundtrack to make it more of a comedy. If the sound of farting shits counts as comedy (it does). I’m guessing to cash in on LOVE AT FIRST BITE. It’s pretty terrible in comparison to DS, I haven’t seen LOVE yet. If someone was to cut the extra sex footage into the DRACULA SUCKS to make it more consistently hardcore you would end up with possibly the greatest hardcore horror picture ever made. Jamie Gillis and all are still pretty marvelous even in this disastrous version, so it would be neat for someone to take the elements and construct a “perfect” version since this one didn’t seem to have a proper release from the get go. (Based on the commentary with William Marigold, cocaine was probably the main reason for that.)

That’s it for now. As of this writing, ISIS is knocking apart ancient artifacts with sledgehammers, and I’m watching movies of all stripes. It makes you feel helpless.