The world continues to be scary, but not as scary as the past. Last October anyway when I ventured deep into the scary movie cannon and really started to binge hard. Join me, wont you? 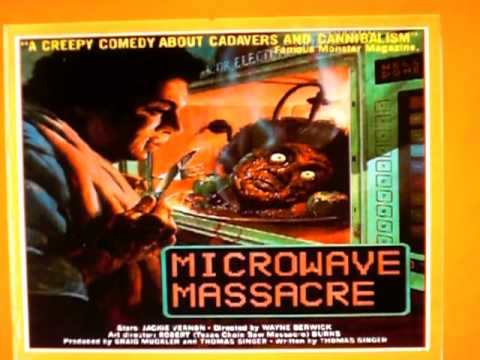 054 10/20 Microwave Massacre (1983) Blu-ray 3/5   Call it low expectations, but this one is pretty good. Stand up legend Jackie Vernon stars as a man who’s so sick of his wife’s fancy microwave meals that he eats her. It’s played for laughs, but there’s few laughs to be found. It’s cheap, the acting is terrible, the gore is lousier than Herschel Gordon Lewis but it manages to work. This is one I would of skipped in the VHS era but it managed to surprise me.

055 10/20 Slugs (1988) Blu-ray 3/5   Another one from the VHS era I would of skipped, and another case of low expectations. Surprisingly they play this one pretty straight considering the stupid plot of slugs attacking an American small town. Don’t get me wrong, it’s not going to unseat Jaws or anything, more of a case of it’s not completely shit.

056 10/20 The Bloodstained Butterfly (1971) Blu-ray 3/5   Pretty typical giallo that focuses more on police procedure than the actual murders. The plot is the typical convoluted “Who done it?” thing, this time trying to find the “Park Killer”. That said, it’s good enough to keep you interested.

057 10/20 Vamp (1986) Blu-ray 3/5   A couple of frat boys looking for strippers stumble upon a club full of VAMPIRES! I had forgotten all about this one having not seen it since the VHS debut. It’s not bad. Grace Jones manages to pull off a silent performance, it’s garish in the 80’s look and it’s fun despite being a bit shit.

059 10/21 Dead-End Drive-In (1988) Blu-ray 3/5   This one is more of a Mad Max style Ozploitation than a proper horror. People love this one but it left me a bit flat. Youths are corralled into a Drive-In Prison camp. If it didn’t have such good action set pieces I would have given it only 2.5/5. UPDATE: The Arrow blu-ray of this one is fantastic with a couple of shorts: The Stuntmen and Hospitals Don’t Burn that are both amazing!

060 10/21 Basket Case 2 (1990) Blu-ray 2/5   Continues right where the last one left off, this one finds the brothers being cared for in a home for freaks. It’s lacking all the charm that the first one had, and the make-up is terrible for the most part. It’s played mostly for laughs, only it’s not funny.

061 10/21 Basket Case 3: The Progeny (1991) Blu-ray 2.5/5   Continues right were part two left off, and finds the gang of freaks on a road trip to visit a Doctor to help with the birth of Belial’s child. It sucked, but it’s better that the second one. Skip these and watch the original cult classic. I give that one a 4 out of 5.

062 10/21 The Vampire (1957) DVD 3/5   A Doctor accidentally takes pills derived from vampire bats and becomes a Dracula. This is a typical cheap 50’s monster film, which means I enjoyed it and am probably rating it higher than I should. It had everything I look for in a cheap 50’s monster film: terrible monster make-up, incredibly stupid scientific explanations and a plot that moves briskly.

065 10/22 The Green Inferno (2013) Blu-ray 4/5   Eli Roth does his take on the cannibal picture. This one seemed to get hated on by pretty much everyone but I don’t know why. It’s as good as any other cannibal picture (so your taste may vary…) only without the gross animal cruelty. I thought this one was just fine and one of the better ones.

066 10/22 The Cat and the Canary (1939) DVR 3.5/5   A group of heirs must spend the night in a haunted house in order to see who gets the inheritance of their deceased uncle. Bob Hope and Paulette Goddard star in this horror comedy, and they are perfect in it. The film manages to balance the spooks and the laughs. I might have to check out more Bob Hope films. 067 10/22 Knock Knock (2015) Blu-ray 3.5/5   Eli Roth updates “Little Miss Innocence” (though Chris Warfield gets zero credit since they technically remade “Death Game”). Two girls show up in the rain and torture a dad who has the house to himself while his family is away. I really liked this one. Roth goes subtle (which in Roth terms means no gore) with this one and allow Keanu Reeves to do some character work. It get’s a little over the top plot wise in the third act, but not enough to ruin the film.

068 10/22 The Witch (2015) download 4/5   A pilgrim family is banished from their town and must contend with the woods. I really enjoyed this one. It plays out like a drama with a rather slow burn and skips the typical jump scares and horseshit you typically get in modern horror. It makes for a spooky film that can stick with you.

069 10/23 The Blob (1988) Blu-ray 3.5/5   This remake amps up the gore but otherwise stays pretty true to the original. As updates goes, this one is not only pretty good but might be better than the original.

070 10/23 Hardware (1990) Blu 3.5/5   In a “Mad Max “like apocalyptic future a scavenger brings his girlfriend home a robot head that ends up being a military robot that terrorizes her in her apartment. It is at it’s bone a Terminator knockoff, but it’s done with such style and flair that it mostly holds up as it’s own thing. The problem is the small scale ends up compromising it.

072 10/23 Street Trash (short film) Blu-ray 3/5   A liquor store owner starts selling contraband hooch to the homeless that causes them to literally melt. The only thing missing from this one is the “Troma” label in that it’s plot is just an excuse for every gross out gag in the book. Which is fine by me. I just found it a little tedious between the gross outs.

073 10/23 The Fearless Vampire Killers (1967) DVR 3/5   Roman Polanski does a Hammer Horror send up that largely left me flat. I didn’t find that the gags held up and it couldn’t seem to find it’s footing between broad spoof comedy and something more subtle.

074 10/23 Possession (1981) DVR 3.5/5   This one starts off more as a drama about a marriage unraveling in one of the most brutally portrayed ways I’ve seen. Then in the second half it gets completely fucked up. To say any more is to ruin it, just trust me, this is absolutely a horror film.

075 10/24 Sugar Hill (1974) Blu-ray 3/5   A woman recruits a voodoo zombie army to get back at the gangsters that murdered her boyfriend. Probably one of the more gonzo blaxploitation epics you’ll find. I didn’t think it held up as well on this second viewing, but that may be due to my first viewing taking place in a bar full of drunken film fans. That said, the plot is irresistible.

076 10/24 Blacula (1972) Blu-ray 4/5   It’s easy to write this one off as simply a “Black Dracula” movie, but it’s actually one of the better contemporary versions of the Dracula myths that helps it to transcend its exploitation bases. It ends up being a ton of fun.

077 10/24 Tentacles (1977) Blu-ray 2/5   I’m fine with a Jaws rip-off, and I can get by with cheap effects. There is no excuse though for horrendous plotting, stunt casting – I’m sure Henry Fonda didn’t spend more than a day on set – extraneous scenes that do nothing and worst off all, setting up a joke with no punchline. I hated this one. I’m only giving it two stars out of respect for Fonda, John Huston and Shelley Winters.

078 10/24 Dark Water (2002) Blu-ray 3/5   This one arrived yesterday fresh from Arrow Video so I thought I would spin it. Everything great about J-Horror is here, stylish atmosphere, creepy sound design and a unique ghost story. It just all leaves me flat.

79 films and still not done! It was an epic challenge for me, so there will be one more post next week provided the internet isn’t abolished.