Another mixed bag of a week. Sort of. I decided to watch some un-watched Criterion Collection discs this month, which lead me to watching all my David Lynch titles that are not in boxes in prep for re-watching Twin Peeks before the new series. Despite only two of those Lynch titles where from Criterion. Mix that up with some oldies and a cheeky Vinegar Syndrome title and it’s not a bad week at all.

136 05/07 The Incredibly Strange Film Show: Russ Meyer (1988) 3/5   A very well done biography on Meyer hosted by Jonathan Ross that manages to hit all points of his career included his start as a combat photographer in WWII. It also shows a clip of a possibly 8 hour documentary that Meyer was working on his own life that would of been amazing but was apparently never finished. A real shame. I would love to see a proper feature length doc on this man.

137 05/07 Imitation of Life (1959) 4/5   Lana Turner stars in this soapy melodrama from Douglas Sirk about a struggling, mature actress in New York who befriends a black housekeeper, Alice (played by Juanita Moore, and she is fantastic) and together they find success. Well, sort of, they stay in their roles based on race and that’s really what this movie is about. Alice has a real struggle with her rebellious, white passing daughter that is far more interesting than the trials that Turner has that leave her in a near constant state of helpless hysteria. You can clearly see a through-line from these style of Sirk pictures to John Waters since his characters are always in the same state hysteria. Anyway, this was pretty great since you don’t think of these sort of topics in 50’s films. Also, Sirk really is great at this stuff. He has a workmanlike sense of direction, but it’s pretty perfect.

138 05/07 Blue Velvet (1986) 4/5   After Dune floundered, David Lynch somehow got the chance to make a film closer to his sensibilities first explored in Eraserhead. It was interesting watching this one on the back of Imitation of Life since they have a pretty similar world of 1950’s like innocence, only Lynch’s small midwest town is a perverted nightmare. Jeffrey, played by Kyle MacLachlan, finds and ear in a field and becomes obsessed with solving it’s mysteries that leads him to a world of pain. Dennis Hopper is absolutely brilliant as the force of nature Frank, Isabella Rossellini is fantastic as the damage nightclub singer Dorothy and Laura Dern manages to hold her own as the symbol of everything good, the girl next door. It’s aged very well, and still holds all it’s power to remain one of Lynch’s best films.

139 05/09 Wild At Heart (1990) 4/5   David Lynch does the Wizard of Oz as a bonkers Elvis inspired road movie with Nicolas Cage and Laura Dern starring as Sailor and Lula who spend most of the film either ruminating or fucking. It has no business being as good as it is. Lynch went genuinely weird with this one and it completely works. Willem Dafoe is unforgettable in his small role and it’s fun to see legends Harry Dean Stanton and Diane Ladd go a bit bonkers. Crispen Glover, man, priceless. I’m too much of a Lynch fanboy to call this one my favourite, but it just might be.

140 05/11 Champion (1949) 4/5   Kirk Douglas takes the lead in this boxing noir about a guy and his handicap brother who is on the skids so Kirk gets into the fight game for the money. It starts off pretty standard, but soon Douglas’s mercilous ambition creeps through and the emotional bloodletting eclipses what’s in the ring. I don’t think I have seen Douglas more unlikable in a movie. This one was a real treat, and recommended.

142 05/12 Funny Face (1957) 4/5   I really enjoyed this one. Audrey Hepburn and Fred Astaire star in this musical about a frumpy beatnik girl that gets whipped up into the world of high fashion. Hepburn is far too adorable to be frumpy, but she’s surprisingly good in this musical and manages to steal the film with her avant-garde beatnik ballet sequence in a cafe that’s supposed to be played for laughs. Astaire more than holds his own and it’s all looking spectacular under the direction of the legendary Stanley Donen, who also directed one of my all time favourite films, Singing in the Rain. It’s crazy that it’s taken me this long to watch this one. 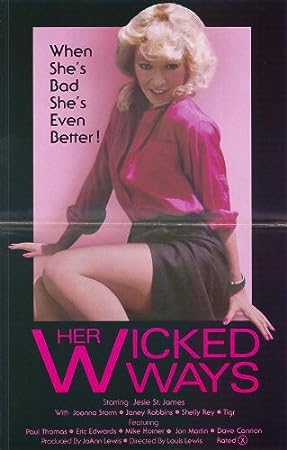 143 05/12 Her Wicked Ways (1983) 3/5 Jesie St. James stars as a gold digging heiress who has just inherited a billion dollars and Joanna Storm is the daughter trying to get the money back in this adult romp directed by The Lewis Brothers. It’s not the greatest adult film you’ll ever see but it’s just so well done compared to the regular fare in the period that it it ends up being pretty fun. Storm is a real scene-stealer and definitely helps to keep the film moving. The Peekarama DVD from Vinegar Syndrome is a real winner.

144 05/13 One-Eyed Jacks (1961) 4/5   The only film that Marlon Brando directed is this western. I think it’s just me but I think it’s weird that his only directed film is a western. Seems weird, right? Anyway, this is a typical vengeance tale with Brando’s Rio seeking out old partner Karl Malden’s “Dad” Longworth who ditched him during a bank robbery. It’s a gorgeous film and done with the naturalistic acting style Brando was known for and just completely works. There’s a feeling of distance and brooding that is tricky for films to nail, and the support cast featuring Ben Johnson, Slim Pickens and Katy Jurado are all perfect as well. Recommended.

One-Eyed Jacks also ended up being the last film shot in VistaVision so I managed to watch two VistaVision films over the weekend. You just never know what’s going to happen when you blindly watch stuff.  Isn’t the world marvellous?