After a week of sunny skies and spring temperatures, today finds the sky back to the gloomy grey that is Edmonton in the winter. Perfect weather for hermit-ting up with movies and other things to distract from the political climate.

This blog may be a psychiatric profile of a cry for help.

042 02/12 59th Annual Grammy Awards (2017) 3/5   I don’t know why I watch these but I always find a reason to. Ends up this year was pretty good. Katy Perry debuted a new song that’s actually kind of a clever protest, Lady Gaga performed metal with Metallica (my excuse to watch this years awards, her halftime show at the Superbowl was amazing) and aside from a dead mic on Hetfield, she rocked. Lady Gaga may be the the legendary performer of this generation. She can sing anything and do so convincingly. The real highlight though was oldie rappers A Tribe Called Quest who performed as an assault unit, attacking Trump (President Agent Orange, as dubbed by guest Busta Rhymes) and it was exhilarating. Oh, and Beyonce did a really artistic performance piece on black womanhood. I think. So yeah, despite all this fun, it still managed to feel like it would never end.

043 02/12 Blood Feast (1963) 4/5   Exploitation legends Herschell Gordon Lewis and David Friedman invented the splatter genre with this one. The effects are primitive at best, the acting not so great and while people always say Ed Wood Jr. was the worst director of all time, I think Lewis fits the crown better since there is a unenthusiastic workman like feel to Lewis compared to the glee in a Wood Jr. picture. That said, it’s an irresistible picture. I’ve forgotten how many times I’ve watched it, but I love it more each time. People joke about the effects, but they really aren’t that bad compared to the regular make-up. The grey hair on younger actors looks like they rubbed a bar of soap on their heads. That’s far more unforgivable than creating a more than decent tongue being yanked out of a girls head effect. I like to think so anyway. This one is a must see (along with the other films in the “Blood Trilogy”, I’ll get to those later) for anyone with an interest in horror history. 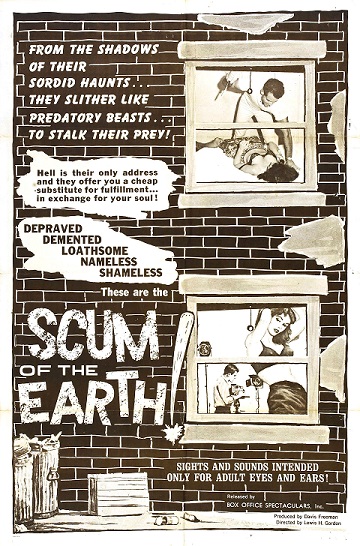 044 02/13 Scum of the Earth (1963) 3.5/5   1963 was a pretty big year for Herschell Gordon Lewis. Not only did he invent the gore film, he was one of the first to put out a film that would be known as “Roughies”. Roughies were the horrible children of the “Nudie Cuties”, instead of wholesome nudist camps full of nubile innocents, roughies were more urban and had pervos creeping on and corrupting women. This one was about a porno photography outfit that hoodwinks High School girls into being models before getting them to shoot nude and then blackmailing them to do hardcore. It’s very innocent despite that description since actual porno wouldn’t be shot for nearly a decade and the brief nudity in the picture is actually sort of tasteful with the real rough stuff happening off camera. Shot in black and white it actually looks classier than it is, and ends up being one of Lewis’s more accomplished pictures. Sexploitation would keep on pushing after this one, Lewis would mostly drift into gore (which based on his final film, the hardcore Black Love, is a very good thing…). Well worth checking out as it doesn’t have some of the pacing issues Lewis’s films tend to have.

045 02/14 Lion (2016) 3.5   A young Indian boy gets lost and ends up adopted by Nicole Kidman’s terrible haircut that is a perfect representation of Australia in this Oscar pick. I quite enjoyed this one in that it sticks with telling the kids true story without getting too over the top with the melodramatics (I think) and without the “Forrest Gump-Ness” of Slumdog Millionaire. Don’t think it was best of the year stuff though.

046 02/14 Carving Magic (1959) 4/5   This one is an industrial short about a guy hosting a dinner party and wows his dickhead friend with his turkey carving prowess. Why would I watch a carving instructional film? It’s on the Blood Feast blu-ray as an extra! It features Blood Feast star William Kerwin as the guy who learns how to carve, but more interesting is that Harvey Korman plays the dickhead friend, this being his first film role. I love Harvey Korman! Go watch Blazing Saddles again and see what I mean! This one was also legit educational, I think I might be able to carve a turkey properly now!

047 02/15 Moonlight (2016) 4/5   This one is about a kid growing up and navigating himself through Black Miami culture. I really liked this one in that it’s the kind of film that is usually made about white people in that it didn’t have any black genre trappings despite dealing with lower income/gang/drug culture. Dead solid performances that ring true in that they are frustrating to watch. There’s no hand holding the audience. I wouldn’t mind if this one won. 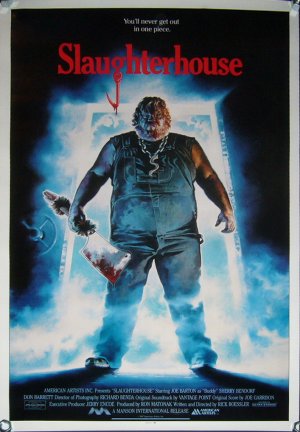 048 02/15 Slaughterhouse (1987) 3/5   1987 seems a bit late to try to pull a rip on Texas Chainsaw Massacre, but when it’s as fun as this one, why not give it a go? A bunch of cool kids decide to hold a party in a foreclosed slaughterhouse. Unbeknownst to them, the owner and his deranged son (who talks in pig-squeals) have decided to kill the people who fucked him over business wise. It’s all an excuse for some typical 80’s slasher mayhem and it delivers which is all you can ask.

049 02/17 Arrival (2016) 4/5   I really enjoyed this one. I had heard it compared to Contact (another one I really enjoyed) but Arrival really is it’s own thing. Aliens have come down and language specialist Amy Adams has to figure out how to communicate with them. It leads to a thoughtful Sci-Fi that is actually pretty rare in these days of action blockbusters. Good stuff, I wouldn’t mind if it won Best Picture.

050 02/17 Parochial Passion Princess (1975) 2.5/5  Depraved hardcore short from Alex deRenzy about a teen prostitute. No one does sleaze like deRenzy, you have to give him credit.

051 02/18 La La Land (2016) 4/5   Hollywood finally does a traditional musical. That’s how this one is billed. The opening number had me cringing since it was so modern Broadway in style, thankfully the film settles down and ends up being really good, and yes, pretty traditional. I don’t think it works quite as well as it wants to- it never reaches the insane dancing fever pitch of the classics- but it’s welcome all the same. 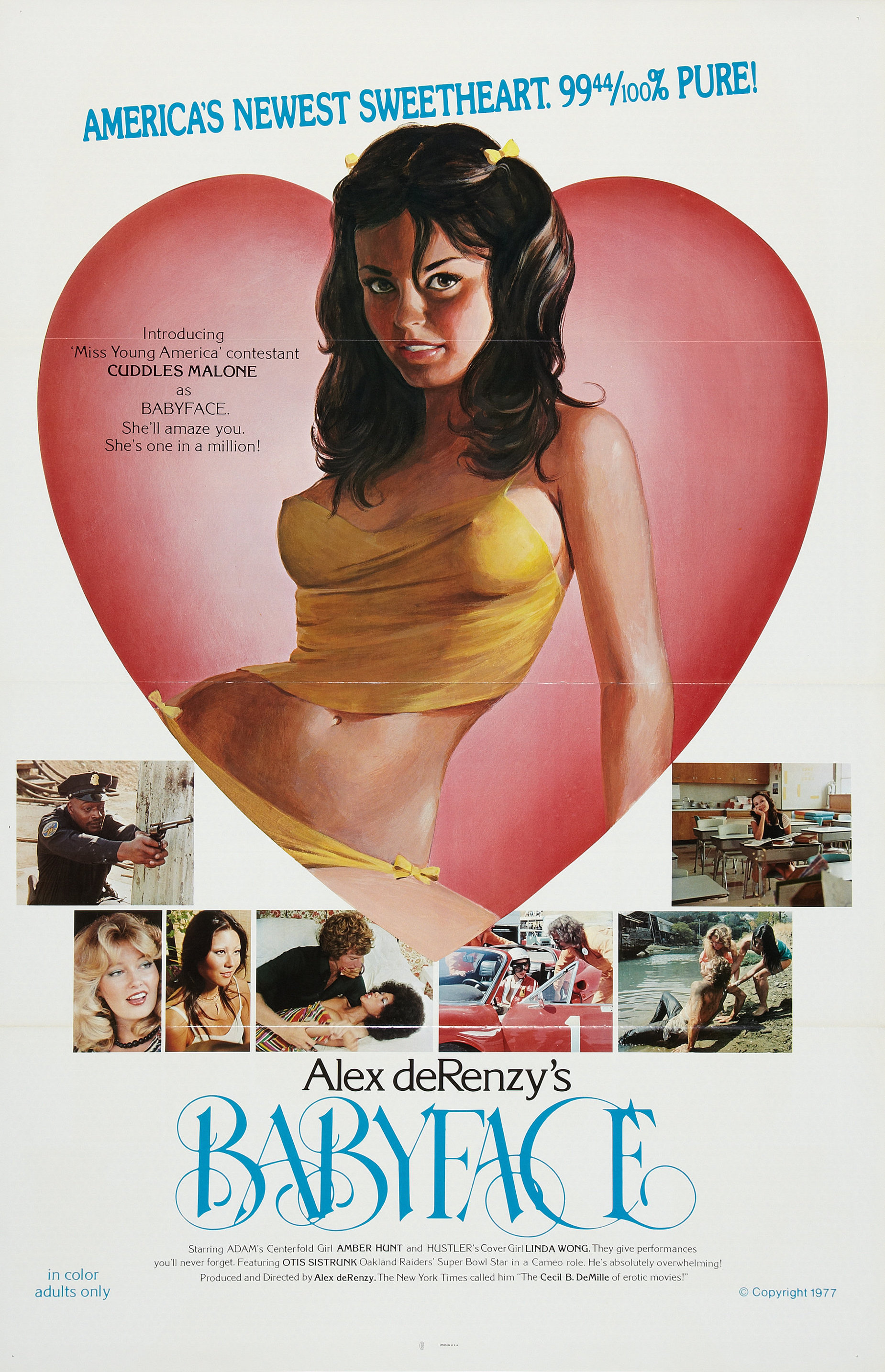 052 02/18 Babyface (1977) 4/5   Feature length film by Alex deRenzy about a guy who gets shanghaied into working in a brothel owned by women for women clients. One of the sleaziest films I’ve seen, it practically is checking off a list of triggers for things deemed politically incorrect and will make you feel squeamish watching it. It’s also done with so much showmanship and glee that it’s hard to be mad about it. deRenzy was a master at this stuff and this one was one is no exception.

So which one should win best picture? I honestly don’t know. None of them wowed me. None of them are bad films, more a case of none of them feeling particularity exceptional or memorable. The only one that really feels like a broken thumb is Hacksaw Ridge, and that’s due to the first half being so schmaltzy. The second half in the war is brilliantly over the top. If I had to pick one I’d go with Moonlight since it’s the only one that didn’t have something in it that made question the filmmakers choice, with Arrival, La La Land and Manchester By The Sea following. Yet despite that, I think I enjoyed Hidden Figures best but found the film technically problematic. It looks like this years Oscars will be mostly blah for me since I don’t have a horse in the race that I really  want to see win. It’s not the first time, and wont be the last.

Which is okay, I got more terrible movies and Gilmore Girls to keep me company.