As warned, now that I’m on staycation, there will be more of these posted since I’m doing nothing but movie watching. Lots of good stuff in this one, and some garbage. Business as usual despite the scary theme.

327 10/15 C.H.U.D. (1984) (Integral Cut) 3.5/5   First time watching this version, and having only seen the film once before, I couldn’t tell you if it’s an improvement or not. One of the most mocked titles of the 80’s, it’s actually not a bad film when you sit down with it. Homeless people are going missing, could it be cannibalistic humanoid underground dwellers? It’s obviously a low budget monster film, but every cent of that low budget is on the screen and they play it pretty straight as well. I’ve certainly seen worse.

328 10/15 C.H.U.D. II: Bud The C.H.U.D. (1989) 1.5/5   Everything done right in the first film is done wrong in this one. It appears to have a higher budget, but instead of monsters the C.H.U.D.’s are now just lazy make-up zombies played for laughs. It’s closer to a Return of the Living Dead sequel, and none of it works. I typically reserve scores less than 2 stars for films that are inept as far as craft, but this one rubbed me so wrong, I docking it half a star.

329 10/15 Wolf Guy (1975) 3.5/5   Sonny Chiba uses his moon driven werewolf powers to try to solve a mysterious crimes where guys are being torn apart by the spirit of a tiger. Sadly, there is no proper werewolf transformations in this one, but it is a blood soaked sleaze-fest of a cypto-crime film. Plus Chiba gets more than a few spots to show off his karate.

330 10/15 Ghostbusters (2016) 3.5/5   Finally got around to this one and really enjoyed it. Rather than basically remake (see Star Wars: The Force Awakens) or mock (see the countless comedy reboots of TV shows) the original, they made a new Ghostbusters movie and it was a lot of fun. I liked the casting, I liked the set pieces, a bunch of jokes worked. It’s all you can ask for from movies like this. The Blu-ray weirded me out though, a bunch of CGI goes outside of the frame mattes. It’s weird and distracting more than neat. Stop doing that.

331 10/15 We Are The Flesh (2016) 4/5   Mexican film that can be best described as “Jodorowsky takes a crack as Salo.” Not a horror film in the traditional sense, there’s a never ending sense of dread and by the end I was thinking the characters had created hell. Gorgeous and explicit, it won’t be for everyone. Images from this will be stuck in my brain for a while, and I’m sure being ignorant of Mexican history and culture means I’m missing out on many of the themes tackled. 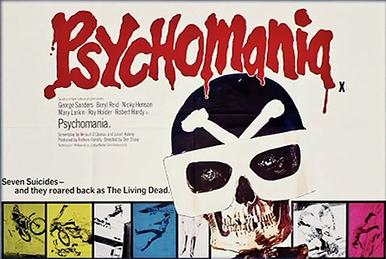 332 10/16 Psychomania (1973) 2.5/5   British horror biker film, of all things. A gang leader figures out how to return from the dead and convinces his gang to follow him.  It’s not a bad film per say, and I can see how it has a cult following. I just didn’t find it all that interesting despite the gimmick. I can also see how if could have been problematic upon release since the returning from the dead bit is so simple, anyone could do it. I’m not one to cry about filmmakers being irresponsible, but this one could make a case if someone was stupid enough to try.

333 10/16 House (1985) 3.5/5   Another one from back in the day that I seem to think was stupid but revisiting it I thoroughly enjoyed. A Vietnam vet horror writer returns to his late aunt’s house and encounters things that go bump in the night. It’s played light, but also pretty straight so the tone works in it’s favour as opposed to against it.

334 10/16 House II: The Second Story (1987) 2.5/5   The sequel tells a brand new story about a guy who moves back into his ancestral house to discover his great grandfather stole an Aztec crystal skull that allows wishes. Played much more lightly than the first one, it simply doesn’t work. I found it tedious.

335 10/16 Wicked Wicked (1976) 2.5/5   The split screen Duo-Vision is unleashed onto the public, and it’s mostly just annoying. Sparingly, dePalma proved that it can be an effective technique. An entire film is split screen though ends up being annoying. Anyways, it’s a third rate thriller that isn’t heightened by the gimmick.

336 10/16 Brain Damage (1988) 4/5   Frank Henenlotter’s follow up to his cult classic Basket Case holds up fantastically. A young man become host to a psychedelic parasite that thrives on brains. It’s silly, but it works with some great, and considering the budget, ambitious effects.