100 movies. I hit 100 movies with The Gore Gore Girls, of all things. All these years of tracking films and I never manage to hit a milestone with a proper classic.

094 04/09 How To Make A Doll (1968) 2/5   Another dire Herschell Gordon Lewis comedy, this one about a hapless professor who uses a swanky computer to build sexy girls. 95% of the humour is derived from mugging like a silent picture, and since Lewis was gunning for a general release there are not even tits to look at. Add that to the usual incompetence and padding and this one ended up being charmless. Watch Weird Science instead since it does everything this one does, only better and with Bill Paxton.

095 04/11 I Sell Anything (1934) 2.5/5   Pat O’Brien stars as a loudmouth pawn shop auctioneer (?! I have no idea if that was a real thing or not) plotting a scam on the Manhattan bigwigs in this comedy. Not a terrible time killer, it’s not exceptional in anyway. Why it was included on the Forbidden Hollywood Vol. 9 set is a mystery since it’s not a pre-code film or edgy in anyway.

I give the Forbidden Hollywood Vol 9 DVD set a 3/5. Probably the weakest volume, with Cabin in the Cotton and Hell’s Highway being the best of the 5 pictures. 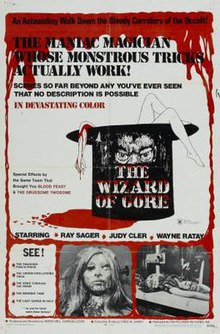 096 04/12 The Wizard of Gore (1970) 4/5   HG Lewis is back to the gore film with this one, and he goes all out. The story makes zero narrative sense, about a stage magician that creates horrifically gory illusions only for the participants to later be found dead suffering from the same wounds from the act. Is it hypnotism? Is it all a dream? Is it complete bullshit? All I know is it’s gleefully over the top and probably Lewis’s most accomplished film that completely delivers despite the terrible acting that ranges from the over-acting Montag the Magnificent (that actually fits the character) to no-acting from the rest of the cast. An absolute must see, it really is a great film and the gooey effects hold up pretty well.

097 04/13 Before Sunrise (1995) 4/5   Richard Linklater’s “Before Trilogy” is one of those wonderful things that will never happen again. I think, I haven’t seen the third picture yet, but it was nice reconnecting with this one. Ethan Hawke and Julie Delpy star as two twenty somethings who meet on a train and spend a day together in Vienna. It’s all walking and talking, and it’s fun to hear what was on the minds of Generation X twenty years ago. I can’t think of a more intimate movie about falling in love. It’s pretty near perfect.

098 04/14 Incredibly Strange Film Show: Herschell Gordon Lewis (1988) 3/5 Biography of Lewis hosted by British presenter Jonathan Ross actually does a great job in catching up with the man and going over his career. There’s a better documentary that goes deeper, I’ll get to it later, but this one is fine for what it is. 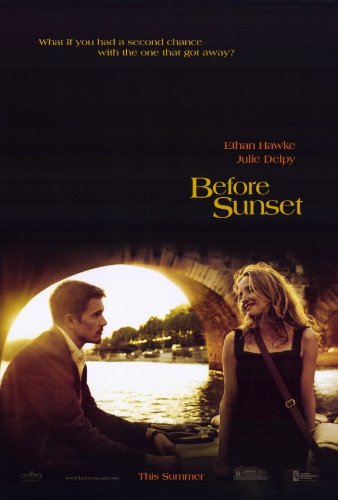 100 04/15 The Gore Gore Girls (1972)  3.5/5   Herschell Gordon Lewis’s final gore film before his comeback with Blood Feast 2: All You Can Eat in 2002 plays like a bonkers The Thin Man, with a William Powell wannabe investigating brutal stripper murders with a sassy news reporter. Despite being played pretty light, this one has the most brutal in tone murders than any of his films which makes the whole thing a bit surreal. Not the greatest capper for the Godfather of Gore, but good enough. 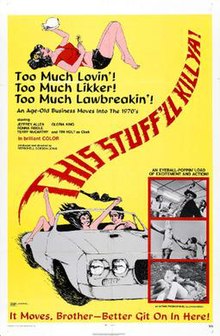 101 04/15 This Stuff’ll Kill Ya! (1971) 2/5   HGL returns to the hillbilly’s selling White Lightning genre and it’s simply a bore. Comedy doesn’t work, the only pleasing thing is the country music which isn’t saying much.

102 04/15 Before Midnight (2013) 4/5   The final film of the “Before Trilogy” makes me hope it’s a Quadrilogy. To say more would ruin it, but it manages to capture the best intimacies of the previous films while expanding at the same time.

I would give the whole Trilogy a 4/5. I’m biased, I’m the age of these characters and identify with most of the stuff they are going through. It makes the films play like parallel memories, and stirs the past in my muddled brain. The Criterion Blu-ray set is gorgeous.

As you can probably tell, I tried to burn through three boxsets this week. I still have a film to watch in that Shock & Gore Set. I’ll FINALLY finish it next week. HGL films are best watched when spread out as opposed to two a week like I’ve been doing. I watched the commentaries on the discs so some weeks I watched both films twice. I should of counted the commentaries. Someday I’ll figure this blog out. I still have to watch the extras on the Before Trilogy, so next week might be a little thin. Depends, I obviously am not planning this thing out in advance.

This week also sees the world closer to thermonuclear war than it’s been since the Cuban Missile Crises. Knowing my luck my last film will be a HGL commentary.

Another week of existing! This one is a short post. All the Oscar noms I planned to watch got watched last blog and this week saw me catching up on other things. The week was also a real pain in the ass. Why does everything have to seem so hard?

The day of this post sees the passing of Bill Paxton. One of those actors who was great in everything he did. Probably best known as James Cammeron’s scene stealing dependable  in Aliens and Titanic,  I recommend checking out his directorial debut Frailty, as well as A Simple Plan and Near Dark as they are my favourites. And Fish Heads, of course. I already miss him.

This adds up to this one being short and sleazy. Blame Vinegar Syndrome and Arrow Video. At least one of the films is a bonafide masterpiece.

053 02/19 The Love Slaves (1976) 3/5   A drug dealing syndicate is snatching up women to hypnotize into love slave assassins and detective John Leslie is on the case. Not a bad hardcore feature from Bob Chinn, it never really fully embraces its sleaziness and doesn’t convince as a drama so it ends up a little flat compared to others in the genre.

054 02/20 Two Thousand Maniacs! (1964) 4.5/5   Herschell Gordon Lewis follows up Blood Feast with his masterpiece, Two Thousand Maniacs! A group of Yankees get roped into the centennial celebrations of the southern town Pleasant Valley. It’s a rip on Brigadoon of all things, with the southerners wanting vengeance for Northern atrocities committed during the Civil War. It’s a gleeful mess of a film, with the infamous “Barrel Roll” scene being the height of ridiculous for any splatter film in the genre. An absolute must see.

055 02/22 Moonshine Mountain (1964) 2/5   Herschell Gordon Lewis does a hicksploitation with this one. A country singer travels to the mountains to get a feel for “real folk music”, gets all twisted up in moonshining shenanigans. It’s an absolute mess of a film that’s tonally flat out does not work. The southerners are all hick stereotypes and appear to be played for laughs. One of the girls characteristics is being sexually abused to the point that she’s practically mute, which is NOT funny, but not really depicted seriously either (despite a resolve near the end). Then there’s the bit in the last 3rd where shit is going down with the crooked sheriff that features a federal agent getting stomped to death and his body dumped in a still that is better fit for Two Thousand Maniacs since there is zero humour about it and despite editing is brutal to watch. None of it works with the usual Lewis knack of bad takes and stiff performances. With no gore or sleaze to heighten it, it ends up as a real patience tester of a failed comedy. If it’s supposed to be a comedy, Lewis says in the extras that he was asked to make a rip-off of Thunder Road, the moonshine hit with Robert Mitchum. This does not resemble that film at all.

That’s it for this week. I don’t have much to say. Last night a friend I haven’t seen in years do to a falling out contacted me out of the blue in separate straights wanting to borrow money. I don’t have it to give him. I don’t owe him anything, but it leaves a mixed, bad feeling of guilt and other things.

The world gets exhausting.