Here we are with the round-up! And it’s a month end one as well, hence I’m late posting it! Boy, November flew by. I got in a few movies, which is surprising since this was a busy weekend. It was Black Friday, which is an American Armageddon like event for shopping. We don’t really do it here in Canada, but the local record shops do participate in the Record Store Day event with exclusive releases. So this weekend has been a lot of record listening in my house. I also got notice that my PONO player will arrive early this week, so I have a feeling that movies will take a little slide this week too. Let’s look at what I watched, and be prepared for a bit of a bitch over the first one.

I didn’t watch all of these on the one day, but over the past couple weeks. Part of looking after an older parent is you get to watch stuff that you normally wouldn’t watch. The Hollywood Film Awards has to be the biggest pile of back slapping bullshit I’ve ever seen. The winners know they won, so one of their friends gives an admiring speech and they accept the award. Ridiculous. The CMA’s was just god awful. Modern country music continues to sound like shitty hair metal power ballads from the 80’s and I hate it. The AMA’s were pretty much just as bad aside from a some good performances by Taylor Swift and some girl band I never did catch the name of, Crystal Head? I don’t know, but the rest of the acts were the shits. Give me my old garbage over this new garbage that features Lil Wayne honking like a duck with something caught in it’s throat.

370 11-24 Zatoichi Goes To Fire Festival (1970) 4.5/5
Film 21 in the series and holy shit did it not disappoint! Zatoichi is labeled to be killed by a blind Yakuza boss, and the battles of wits and swords is fantastic! There hasn’t been a single dog film yet in this collections, and this one was one of the best.

371 11-25 The Ghost of Frankenstein (1942) 3/5
This one is simply good enough. Bela Lugosi is back as Ygor, and he finds Frankenstein’s other son to get the monster going again. The current Frankenstein has figured out brain transplants so things get goofy. Lon Chaney Jr. gets a crack at playing the monster and he does a great job, as does Bela. It’s all just a bit too goofy in comparison to the previous films.

372 11-27 Two Rode Together (1961) 3.5/5
This is the last film in the John Ford Columbia Pictures Collection put out by TCM, and the only one in the set that is a western. Starring James Stewart as a total asshole marshal/bounty hunter who is hired up by Richard Widmark’s army to make a deal with some evil Indians to trade back kidnapped kids. Ford supposedly hated this one, and Leonard Maltin shits on it a bit in the extra features, but I’ve seen worse. Stewart and Widmark are both great in it which helps make up for the scripts shortcomings, like the annalistic racism that it’s riddled with. It’s definitely the ugly brother to Ford’s masterpiece “The Searchers” which deals with similar themes. In the end, it’s a Ford western, if you’re a fan, it’s worth checking out.

373 11-28 The Goonies (1985) 2.5/5
Re-watched this one for the first time since seeing it in the theaters back when I was 11 years old or so. Yeash. I didn’t care for it then, and I just don’t care for it now. This ones considered a bit of a classic these days, so I was hoping to be surprised. Nope. The kids are all great, especially Sean Astin and Josh Brolin. My problem is I have no tolerance for eight kids all yelling wisecracks at and over each other for two hours. If you don’t mind the racket, there’s lots to like in this one.

374 11-28 Pretty Peaches (1978) 4/5
After Vinegar Syndrome released Pretty Peaches 2 & 3 earlier this year, I figured this one would continue to go unreleased. Low and behold, they put it out as a limited edition blu-ray with a regular DVD coming next year. Looking fantastic, it was great to see the one that spawned the sequels. While the sequels felt more like loop carriers, this one feels like a proper film with a genuinely funny story that is still packed with sex. Desiree Cousteau makes her debut in this one as Peaches, and she is perfect as the pouting and perturbed amnesiac constantly being taken advantage of in every way possible. The rest of the cast is just as good, and this one makes it clear that prior to the video era, de Ranzy was up there with Henri Paris as far as being able to make quality films that happened to be porn. This Vinegar Syndrome blu also includes clips from the only known filmed interview with de Renzy, on top of a movie looking better on disc than most mainstream films from the same era. If you like the idea of a Russ Meyer movie done hardcore, this one is the one for you. 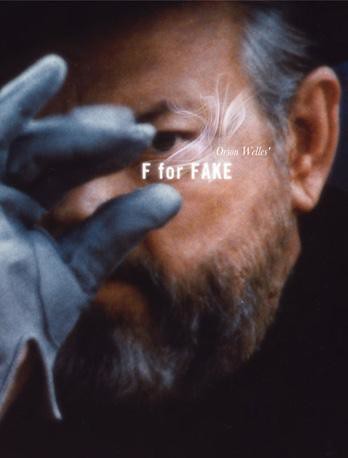 375 11-29 F For Fake (1975) 4/5
More of an essay than a documentary, this is Orson Welles looking at Elmyr de Hory, the worlds most notorious art forger who was biographed by Clifford Irving. While in production, it was discovered that Irving forged the infamous Howard Hughes Autobiography. Welles himself is a famous fake, responsible for the War of the Worlds hoax, so it’s a film about fakes, made by a fake. It’s a whirlwind of theory, editing, all solidly in Welles hands, and it breaks your heart that Welles never had a chance to have this much control on his films since it is a wonder to behold. Cheeky, funny, interesting, and all Welles, it’s highly recommended.

This one finds Griffins grandson trying to avoid his grandfathers horrible legacy of invisibility only to get swept up in world war two after nazi agents track him down and try to brace him for the formula. It’s straight up WW2 propaganda, but it mostly works and is a lot of fun, especially Peter Lorre playing a Japanese agent after being typecast from his Mr. Motto role. Oh yeah, it’s pretty racist and of it’s time to.

Not a bad week, or month really. No horrible films watched, aside from those dumb awards shows. Let’s look at the final numbers.

Actually nailed a movie a day! I think this is the first month. Still nothing at the theaters. I just have little desire to bother going. That said, I really need to see Interstellar in the IMAX.

Let’s see how I did last year:

Look at that, one more watched and the same amount of new films! That’s never happened. This is creepy, let’s move on.

Best of the month is: F For Fake, Pretty Peaches, all the Zatoichi films I watched and Wreck-It Ralph.

No worst of the month, other than the award shows. And maybe The Goonies though it’s really not a bad movie, just too annoying with the kids.

That’s it for now, thanks, as always for reading.